The Royal British Legion Scotland asked pipers all across the country to play When the Battle’s O’er at 3 o’clock on Friday 14th May. The pipe tune is a traditional 3/4 march often played at the end of a battle or, nowadays, during Beating Retreat.

Roddy Mackenzie, Altass played the tune at Rosehall’s war memorial to mark the 75th anniversary of Victory in Europe Day 1945. When he was a member of Wick Pipe Band, Roddy played at the 50th VE Day anniversary parade through London, although on this occasion, due to present conditions, there was a crowd of only three. A small posy of purple and white heather tied with Mackenzie and Macdonald ribbon was laid.

Also part of the National Tribute, Gillian Bee played the pipes in Ardgay. Grateful thanks should go to Iain Munro for erecting and painting ‘Poppies’ on his new garden fence around the War Memorial. 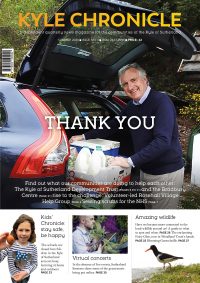 The answers to the following clues (criptic, anagrams and reputed meanings) are all placenames within the Kyle of Sutherland area (see map).

Growing food in your garden

There has been a big upsurge in local people wanting to grow their own food during these uncertain times. There is still time to sow and plant out in June.

Here you will find the solutions to the three sudokus and crossword published in the last issue of the paper edition of the Kyle Chronicle.

Betty Wright Chairperson Ardgay and District Community Council reflects on the challenges brought by the virus.

Letters to the Editor

Little Sad Story and Thanks