So how many bat species are there in Sutherland, and which areas are best?

Common pipistrelle is by far the most numerous and widespread. It frequents a wide range of habitats, from lush riparian woodlands, to upland hill ground and even extensive sea cliffs. It is such a hardy wee thing, it can tolerate being exposed to very cold temperatures during hibernation, unlike others bats that seek a stable but cool environment. It is a generalist and can be found almost anywhere. For example, it has been recorded travelling up to at least 7km from roost, to forage on coastal cliff grasslands. I have also recorded common pipistrelle in the very heart of Sutherland, foraging over exposed high hill ground at Loch Choire, Ben Klibreck. It really is such a tough little critter, with ample tenacity and endurance.

We know less about the distribution of Soprano pipistrelle in Sutherland. However, we do know that this wee bat normally represents less than 10% of all pipistrelles recorded in our area. Therefore, it is less numerous and will mainly frequent traditionally higher quality bat habitats, such as Kyle of Sutherland wetlands, Amat pine wood, Ledmore oak wood (Spinningdale) and the river Carron (Ardgay area). It generally depends on ‘softer’, lush and high-quality natural habitats. Few roosts have ever been confirmed in Sutherland and no hibernation sites have been discovered thus far.

Bats are our only free-flying mammals, they are our ‘night swallows’ foraging on midges, spiders, flies and moths

Daubenton’s bat is the ‘water bat’, and it is well at home skimming low over calm water searching for small insects. Some of the best riparian habitats include some of our highest quality rivers, such as the River Carron, River Oykel and River Shin. It will also favour other sites, such as Little Loch Shin (Lairg), Kyle of Sutherland (Invershin/Culrain) and the River Evelix. It is occasionally recorded foraging within mature pine and oak woodland in the summer, which tends to hint at it potentially using old tree cavities for maternity roosts. It has been recorded close to the North Sutherland coast, but only in small numbers as it edges close to its northern UK limit. It will readily use domestic roosts where natural mature tree cavities are in short supply. At least four maternity roosts have been recorded, but only one hibernation site.

Finally, the Brown Long-eared bat, a woodland specialist, has a good representation in the south of Sutherland, including Strathfleet (Rogart), Golspie and Brora. It seems particularly scarce in the west for some reason. Although a woodland specialist, I have recorded it foraging over extensive dune grasslands at Dornoch. The northern most maternity roost has been recorded from the Brora area. However, it is quite likely this enigmatic bat goes under-recorded, due to its very quiet calls, making it difficult to detect.

Bats are our only free-flying mammals, they are our ‘night swallows’ foraging on midges, spiders, flies and moths. They are quite remarkable creatures. However, as they can often roost in our houses, they can occasionally pose a problem. If so, call the NatureScot Bat Helpline on 01463 725 165, or go to Bats: advice for homeowners | NatureScot. Remember bats need friends, so please be as sympathetic as you can – thank you. 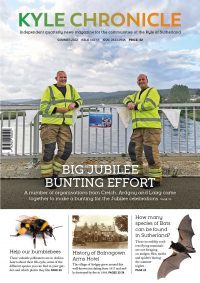 With so many activities restarting this summer after a long hiatus, this summer 2022 is bound to be exhilarating

Community owned chemical waste disposal at Falls of Shin to gather waste had been damaged to allow dumping of waste without charge.

By Dave Goulder. Emerging from my cocoon / I try to stand against the blast, and hear / a train roaring through

Our weekly Community Café is now fully operational again thanks to all restrictions relating to Covid19 being lifted.

Last year KoSDT was awarded £44,000 of funding by the Communities Recovery Fund to support community growing projects across Sutherland.