Back in the 1940s and 50s, the hoeing of the turnip, a time-consuming and back breaking task was made into a competition, alternating each year between The Poplars and Invercharron farms. W. A. M. MacKenzie shares his memories of this event.

Casting my mind back seventy odd years it is easy to be awed by the mechanical changes which have taken place on our farms. But when I look more closely I see that essentially little has changed. The seasons rule the work and the formula is still to sow and to harvest. Machines have got bigger. Huge tractors pull multi bladed ploughs which need a couple of acres to turn round. Hay making has been replaced with silaging with the resultant loss of that robust proclaimer of Summer, the corncrake. Grain harvests used to entail the sailed majesty of the binder, followed by stack building and finally threshing. Now the whole thing is accomplished in one fell swoop by a gargantuan Combine Harvester.

There is however one major task which took up hundreds of man hours which has entirely disappeared and taken with it one of the big days out of our calendar, the Hoeing Match.

Hoers appeared across the land. From the croft where a lone man spent his lonely evenings to big farms like Invercarron where crews of seven or eight wended their thinning way across the big fields. The crew was made up of the regular farm staff, Jim Munro, Harry Jack, Donnie Doull, Geordie the shepherd (if he couldn’t come up with a sheep related excuse to be elsewhere), followed by a selection of crofters, Watt Clark, Hughie Matheson, Alick Campbell and the like. And if the school holidays allowed I tagged on behind.

The crofters were mainly good weather attendees. They came for maybe a day or two to keep their end of barter arrangements such as the use of the farm tractor and trailer to bring home peats or sticks. Or in return for sexual favours. The farm bull served the crofters’ cows.

Many found hoeing back breaking. Many found it heartbreaking. But I enjoyed it. The crew moved at the pace of the slowest and a good boy hoer, like me, could keep up with the old men and was given an education in subjects which were not covered in school. Sometimes Hughie, who was a staunch Free Church man, would interrupt one of Watt’s reminiscences to draw attention to my presence but, thankfully, Hughie wasn’t there every day.

We kids had three sections of drill each of about 30 yards long. We painstakingly smoothed the soil and laid each turnip at right angles to the razor sharp drill

I had entered the Hoeing Match a couple of years before I joined the professional crew. Brother Peter, who was a master of the hoe, taught me. On my first venture I won the youngest class and got the prize for being the youngest competitor so that was me hooked.

The hoeing presented to the judges on Match day was very different from the speed governed daily work. Yes the seedlings were singled but on weekdays there was no effort at keeping the drill edge razor sharp and each spared plant lying at a perfect right angle.

As I hinted above there was no shortage of available prizes. As well as age divided children’s classes there were the main events, the men and women’s competitions and there were oodles of prizes in every section. There were prizes for the best from Ross-shire, from Sutherland and from Caithness. That was narrowed down to further titles for Kincardine and for Creich. First finished in each class was rewarded. Then there were prizes for the youngest and the oldest, the most recently married and the newest parent (often the same blushing recipient). Upon reflection I think that, to avoid accusations that Maclaren was getting his hoeing done on the cheap, everyone did get a prize.

There was a big cup and a big cheer for the Champion – in my day I recall it was usually Billy Henderson from Culrain.

I have often wondered if the turnips honoured by the gentle caress of the Champion grew any bigger or better than those who stood up to the treatment dealt out by a bourachy boy like me. I like to think not. 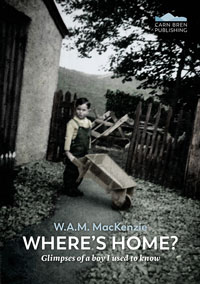 W.A.M MacKenzie’s memoirs Where’s Home? Glimpses of a boy I used to know are available to buy as a paperback from www.carnbrenpublishing.co.uk or as Amazon kindle e-book.

Nigel Webster from Gledfield Mill Pottery opens the doors of his studio and lets us have a peek at the process of loading, firing and unpacking of the kiln.

It’s a busy time in the garden, clearing away and getting ready for the winter. There are many sources of gardening advice online and in books.

An unidentified object thought to have been a Russian Sputnik satellite was found on the hillside near Ardgay in 1962 by a shepherd named Donald Mackenzie.

Here you will find contact details of clubs and groups organisers to see if their activities are taking place and when they will resume.

Gradually, many common activities we took for granted 5 months ago are resuming. We are seeing the reopening of some venues with social distancing measures