A look at the long history of our Post Office services in Ardgay and Bonar Bridge. From an Edwardian sorting office to computers, and from trains to lorries. (Part 2)

The old building in Ardgay on its last day as Post Office in 2001. The ‘for sale’ signs are visible and the postbox has been removed from the front of the building. © Donald Brown

The old Post Office building in Ardgay was reputedly one of the best examples of Edwardian sorting office in the UK. © Donald Brown

The wooden frames were stamped “ER”, and during the winter months a coal fire was needed to keep the place warm. © Donald Brown

The PO counter around the year 2000. © Donald Brown

Bert Skene waiting at Ardgay Station for the 1pm train with a small bag of mail for Lairg. © Donald Brown

First letter dispatch which was put onto the 3pm train. © Donald Brown

Postmen on the last day that the mail arrived by train into Ardgay on Saturday 1st October 1988. © Donald Brown

The Post Office building in Ardgay was in use all through the 80s and 90s. The back office was a remarkable example of an Edwardian sorting office. In the 1980s the postal staff would wait at Ardgay station to collect the mail from the guard’s van on the northbound train from Inverness. Four of them would spend the next hour or so sorting the mail into the four delivery routes: The Craigs, Strathoykel, Bonar Bridge and Migdale.

In those days, the mail for Dornoch was also collected at Ardgay station and the fifth postman would take it to Dornoch post office. After sorting it there with their Dornoch colleagues, they would work their way back to Ardgay by delivering in Evelix, Clashmore, Ospisdale and Whiteface. The Craigs and Strathoykel routes were also a postbus service. In the summer months there would often be passengers buying a ticket to Carbisdale Castle youth hostel.

Once all of the post boxes in the area were emptied and the mail collected, Greta and Bunty had the job of sorting into British counties, major cities and overseas bundles then tying it up in bags. The first mail was dispatched on the afternoon train while the later mail was taken in a van to Tain from where it began its journey south. The last day that the mail arrived by train into Ardgay was the 1st October 1988. The following day it arrived by lorry as it continues to do so today.

Angus MacLeod retired in 1989 and Frank Lee, who had been working as a relief postman became full time. Frank retired in 2003 and was replaced by John Campbell.

Greta MacDonald with one one the first computers used at the PO. © Donald Brown

Angus Macleod (left) shaking hands with colleague Ian Matheson on the occasion on Angus’ retirement in May 1989. © Donald Brown

In 1994, Greta and the PO staff threw a retirement party for Bert Skene and David Mackay who had both been working as postmen in Ardgay office for over 20 years. The Burns Supper and dance were in Culrain hall and almost 120 people attended including staff from Dornoch and Lairg offices. © Donald Brown

On 31st May 2001, after almost 100 years as a post office, the building was sold and the counter and delivery staff moved across to The Lady Ross. Greta MacDonald continued as postmistress until she retired a few months later, on 15th August 2001 after 45 years of service. She had begun working in Ardgay PO in 1956. At that time the postmaster was David Mackay and Greta joined Helen Stewart helping behind the counter. Bunty Gordon took over from David Mackay when he retired in 1960 and 20 years later, when Bunty retired, Greta became postmistress of Ardgay Post Office. There were many changes over the next few decades including the business of selling stamps, pensions and banking transactions being computerised in 2000. In November 2001 Greta was invited to Buckingham Palace where she received the MBE from Prince Charles for 45 years of service with the Post Office. Colin Mitchell took over as postmaster until the sorting office and delivery staff were once again moved, this time from The Lady Ross to Bonar Bridge Post Office in 2008. In April 2010 the staff had a party for Ian Matheson who was retiring after 47 years working as a postman in Ardgay. In the last decade, Alan Ross, William Ross, Donald Matheson, Calum Matheson and George Murray joined the team. Alan left in 2013 and William retired in 2018. Alan, William and George all had grandfathers who worked as postmen in Ardgay.

Staff having a break when the post office was in the Lady Ross around 2003. © Donald Brown

Last day of the Royal Mail post bus in Ardgay when the PO was in the Lady Ross. Postman Ian Matheson with retired postmistresses Bunty Gordon and Greta MacDonald. © Donald Brown

Greta MacDonald at her public presentation after retiring in 2001, with William MacLaren and Liz Cormack. © Donald Brown

Ian Matheson on his last day as a postman and delivering his final letter to Jessie and Roddy Macleod at Brae. © Donald Brown

Ian Matheson on the evening of his staff retirement dinner in 2010. © Donald Brown

Chris Bowden, the current postmaster, in 2018.

In the early 1900s, Bonar Bridge PO was situated in the building we now know as the Kyle Bakery and was owned at the time by John Alexander Polson. The post box was in the wall facing the west end of the village. John Polson had six horses and eventually had vans which travelled all over Sutherland with groceries.

The Polson family moved the post office across the road to the Corner Shop, then in the late 1940s to its present location, Assynt House. In the late 1950s the family sold the Post Office and shop to Eileen Calder who ran the business for many years until her son Martin took over as postmaster in the early 1980s. The shop was well known for having a huge selection of greetings cards, stationery and toys. Similar to Ardgay Post Office, it was a very busy and well run establishment. Martin sadly passed away in 2014, the same year that the Kyle of Sutherland Development Trust took over the building on behalf of the community. The family continued with the business until 2018 when Chris Bowden took over, running the establishment as a successful bike shop along with the Post Office. After a few months of renovations the Post Office opened its doors again on Thursday 11th November 2021, with the sorting office returning in the New Year.

Davie Ross, The Dounie Bard, achieved considerable success in 1966 with his song “The Dounie Hills”. He was a postman, a crofter, and a member of the Bonar Bridge-Ardgay Dramatic Society. He had composed dozens of songs and would sing in concerts all over the north. In an interview for The People’s Journal (10/12/1966) he tells about the inspiration for this song: “One day in late spring while walking on the hills by the burnside, I found myself humming a melody and singing the words which are now the chorus. I kept on humming, and as I did I thought of the hills later, when the heather grows purple on Carn Bhren, and I could see in the north west Ben More with patches of white. As I started for home words came to my mind and by the time I arrived, “The Dounie Hills” was completed.” Davie Ross (left) during his retirement in the early 1980s.

One dark, wintry January afternoon in the 1950s, Bunty and postmaster David Mackay realised that Jimmy Holmes, whose delivery route was Migdale, Airdens and Sleastary, had not returned yet. In those days there were no telephones in that area. After 6pm, Jimmy appeared at the office door almost collapsing with exhaustion. The van had got stuck in deep snow drifts at Sleastary and Jimmy had trudged through a blizzard all the way back to Ardgay Post Office. It was six weeks later when they managed to recover the van and it started first time! 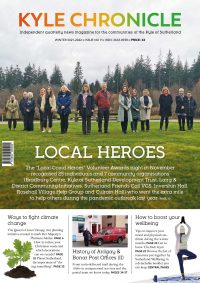 Royal British Legion Scotland Creich & Kincardine, with Lairg & Rogart Branch made a good showing with poppy wreaths and much respect.

Bradbury Centre, back together

The centre opened to members once again in June: we started slowly with very limited numbers we gradually increased our attendance

Looking after your mental wellbeing this festive season

Last Christmas was effectively cancelled and after a very tough couple of years children will be looking forward to Christmas more than ever.