The letter yogh (ȝogh) in Older Scots derived from the letter g, and sounded like a y. In Middle Scots the handwritten character became confused with a cursive z. The early Scots printers often used z when yogh was not available and, as a result, some words have a z in place of a yogh.
Situated on the western limits of the Kyle of Sutherland area, Strath Mulzie, from the Gaelic Srath Mùillidh (probably ‘valley of mills’) and Corriemulzie (Coire Mùillidh) from Coire: corrie, cirque glacier, and Muileann: mill, are examples of a missing Yogh that became a z but is still pronounced as a y.
Another example is the surname MacKenzie, now pronounced as written, though the original form pronounced ‘makenyie’ (/məˈkɛŋji/), from the Gaelic MacCoinnich, ‘son of Kenneth’, was recorded as standard as late as 1946. The surname Menzies, on the other hand, is still widely pronounced ‘Mingis’.
Sources: Wikipedia, Placenames of Ross & Cromarty by William John Whatson 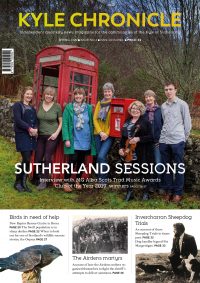 How our forebears fought for their heritage

We look back at some of the history of how the crofters fought for their heritage. We are the heirs and the beneficiaries of that activism.

Creich Community Council held its first meeting of the new year on 21st January in Rosehall.

Would you like to practice a sport, pick up a hobby or simply socialize? Why not join one of the many clubs and groups listed here.

It’s been a very wet Winter at the Gearrchoille Community Wood Ardgay . Watch out for signs of Spring in the woods, such as hazel catkins and frog spawn

We can look forward to the arrival of the osprey. They return back after making the long perilous journey from West Africa where they spend their winters