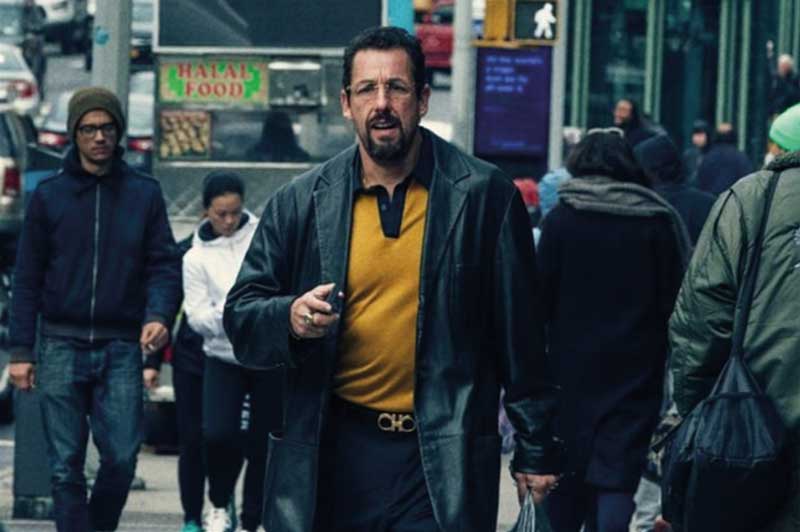 The Safdie Brothers’ newest film brought me more creative inspiration than any film I’ve seen in years. The art they created through this film was incredibly powerful, these directors bring modern grit and energy to this film, differentiating it from anything in contemporary cinema.
Uncut Gems is centered around Howard Ratner, a Jeweler based in New York’s Diamond District in deep with loan sharks due to his gambling addiction. When he acquires an uncut Black Opal worth over a million, his monetary problems appear to be solved. However he continues placing bets with escalating stakes, putting him at more risk in his relentless pursuit of the ultimate win.
The film’s realism is enriched by the direction of its actors to have characters talking over each other and sentences overlapping. This makes the dialogue sound like genuine informal conversation without pauses or obvious one-liners: consecutive watches can reveal dialogue that went previously unheard. Uncut Gems prevalent use of close-ups of its characters gives it a unique visual style that makes the film feel far more personal, making the audience feel like they’ve been alongside them for the whole ordeal.
The common summary of this film as being like an anxiety attack is not inaccurate: the many mistakes Howard makes throughout the film result in some excruciating sequences.
In conclusion, Uncut Gems proves the Safdie Brother’s place in the film industry with their ability to masterfully build tension, creating the most likeable characters out of the worst people.

Due to coronavirus restrictions, we have had to keep the building closed. Hopefully we will be able to welcome visitors once again.

Welcome back to The Hub!

The club is working towards the clubhouse renovation, has expanded its training sessions to cover all age-groups as well as signing up for the North …

Free Church, back to normal

Give a boost to tourism