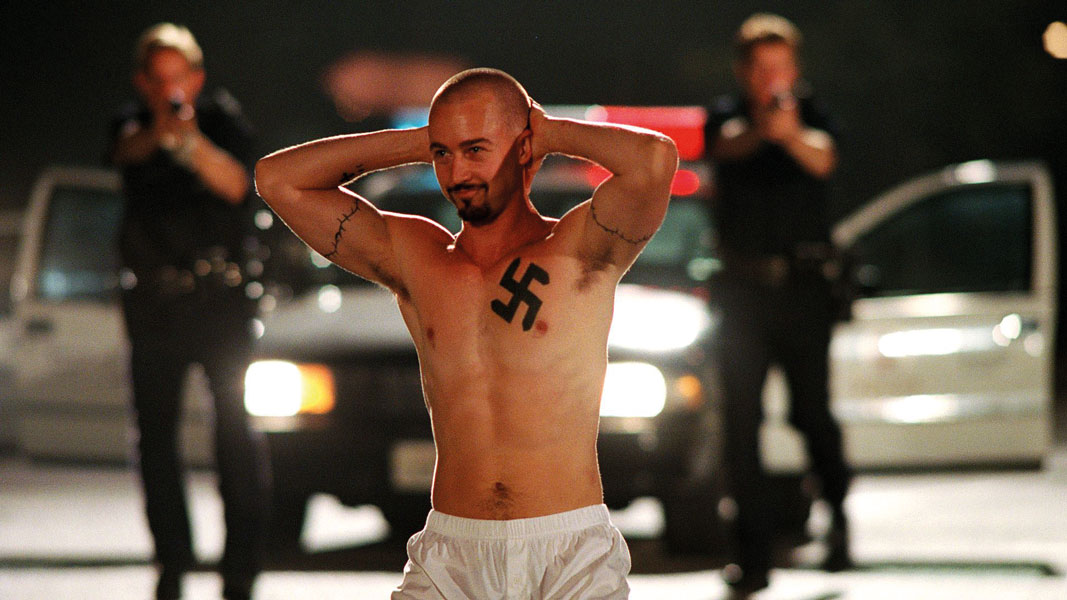 American History X follows Edward Norton as Derek Vinyard, an ex neo-nazi, in his attempts to stop his younger brother from going down the same dark path as him.

This film is gorgeously shot, with sequences set in the past being shot in black and white and contemporary sequences in colour. This works as an effective metaphor in demonstrating the former viewpoint of it’s bigoted characters: the most important thing being whether you were black or white.

American History X is the perfect example of less being more in cinema. It has a very lean narrative, focusing on its central character’s conflicts to draw mesmerising performances from its exceptional cast. Its themes are far from subtle, but this is to its benefit in portraying the neo-nazi skinheads with such blatant and rage-fuelled energy in a way that is both realistic and thought provoking.

Many viewers believe this film fully redeems the abhorrent actions of its protagonist. I disagree with this view completely: by the film’s inevitable ending, Derek lost everything because of what he did, and his attempts at redemption were too little, too late. Something clearly outlined in the final scene is that hate begets hate, and the cycle of violence continues.

There is a very good reason why this film is shown in so many schools: its powerful, uncomplicated messages are deeply affecting, and left a huge impact on me. Having been recently added to Netflix, I would recommend this unforgettable masterpiece to everyone.

Support during the pandemic

Give a boost to tourism

Residents report a surge in people wanting to get inside the semi-derelict Rosehall House, which is cause of concern.

The Kyle of Sutherland area in images throughout the year. Send yours to news@kylechronicle.co.uk   Throughout the middle ages, the Dornoch Firth was the frontier …